Discover all the secrets of the Saint Romain en Gal mosaic 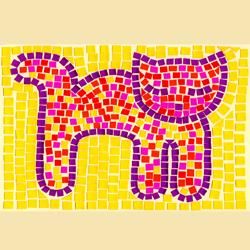 This factsheet will take you back to the days of Gallo-Roman Antiquity and unveil all the secrets of the Saint Romain en Gal mosaic.

The children will be able to familiarise themselves with the mosaic technique. The work, its significance and the agriculture of the time will no longer be a secret to the children! Let the children put themselves in the shoes of Roman artists!

The Saint Romain en Gal mosaic. This beautiful mosaic was discovered in 1891 on the banks of the Rhône in St Romain-en-Gal, near Vienne. It was exhibited at the Louvre until 1935 and then at the museum in St Germain-en-Laye. Originally it measured 8.86m x 4.48m and was made up of 40 tableaux, of which just 27 now remain and which have been restored.

Context and analysis of the work

In 52 BC, the Romans settled in Gaul and tried gradually to get the Gauls to accept their presence. How? Through military domination of course, but primarily by allowing them to discover their rich culture and diverse arts.

The art of mosaic therefore established itself bit by bit in Gaul. The technique – mastered by Roman mosaicists and continually changing – appealed to “local Gaul artists” over the centuries. They in turn were inspired by Roman or Greek mosaics to create lasting works that were just as refined. The new “Gallo-Roman civilisation” came to light in the heart of Gaul...

At the start of the 3rd century, on the banks of the Rhône in Saint-Romain-en-Gal, mosaicists from the city of Vienne created a magnificent mosaic with the theme of the agricultural calendar. This was a faithful and perfect copy of a very specific Roman artwork, with just two other “copies” on the same theme in existence in the world...

Analysis of the work

Exhibited at the Musée de St Germain-en-Laye (Île-de-France), the agricultural calendar mosaic from the site in Saint-Romain-en-Gal (Rhône) was discovered in 1891. It adorned the floor of a sumptuous villa in a residential district of the time. This is what is called a mosaic pavement.

This mosaic consisted of 40 tableaux. Currently, 27 can be seen. Four of them, located at the extreme south of the mosaic, were damaged during a fire.

The theme of the agricultural calendar is not frequently taken on by mosaicists. Furthermore, just two other mosaics in the spirit of Saint-Romain-en-Gal have been discovered:

The Saint-Romain-en-Gal has the largest number of paintings.

The agricultural calendar mosaic was made using tesserae, which are small pieces carved from glass paste, marble and limestone. The tesserae forming the various tableaux of the seasons are 3 to 5 mm square. Those that make up the background of the mosaic are slightly larger at 1 cm square. To assemble the mosaic, the tesserae are inserted one after the other into fresh mortar.

The top of the mosaic consists of a particular aesthetic and refined double border. The first – fine and neat – comprises a frieze of beads and whirls, unheard of in Vienne mosaics. The second – which is larger – is in the form of a polychrome plant arabesque. This features the long, indented acanthus leaf, typical of the Rhône-Alpes region.

Lastly, the various paintings are in turn separated by an ornamental border representing a braid formed of round grains and small domed discs in the middle.

In terms of colours, shades of red, ochre, orange and yellow can be seen... A colour palette relating to the “earth” and by extension its work.

Each season is personified by a mocking angel with chubby cheeks called “putto”, riding a different wild animal:

> Winter is riding a wild boar and looking North.

> Spring, astride a bull, looking South.

> Summer is riding a lion and pointing towards the South.

> Autumn is on a tiger and looking towards the North.

Around each seasonal panel are seven other tableaux:

• Return of the storks

+ 5 tableaux that have disappeared

+ 4 paintings that have disappeared

Lastly, on the north and south extremities of the mosaic are four other paintings. Missing from the south side, the four paintings on the northern extremity represent the heads and lower parts of plants to signify the spring and summer.

A far cry from the mythological images and still lifes usually found at the time in mosaic pavements, the agricultural theme of the Saint-Romain-en-Gal mosaic is striking in terms of its rustic aspect and its unusualness.

The mosaic portrays major religious festivals, everyday activities and farming activities in an effective and original way. Far from seeking the Greek ideal, the mosaicists here have sought to represent as faithfully as possible the simplicity of everyday life. This is called “plebeian” art, which means that it depicts people but from a primarily scenic angle.

This is a means of extolling the praises of agricultural work and glorifying divine power through its religious rituals... 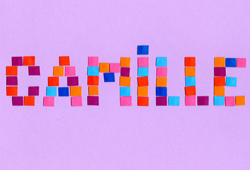 Get the children to cut out squares and triangles of coloured paper. To help them, you can trace a few horizontal and vertical lines onto the coloured sheets beforehand. This will make it easier for them to cut out the “tesserae” using the grid pattern.

Show each child an example of their first name and ask them to recreate the letters in the form of a mosaic, using the paper squares and triangles.

To enhance the experience, you can give additional instructions asking the children to alternate the colours or shapes of the paper tesserae. 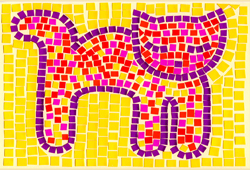 > To develop creativity and accuracy in composition

> To try out the contrast technique using colour, background and form

Get each of your children to choose an animal. You can give them a few ideas: dog, cat, dolphin etc.

Then get them to cut out squares and triangles of coloured paper and ask them to stick them on a sheet of white paper to recreate the animal they have chosen. They can trace the outline of the animal in pencil on the paper beforehand.

Explain the concept of contrast to them and get them to define the shape of the animal using a border of squares in a different colour from the rest of the mosaic.

Inspired by this work sheet? Why not continue the adventure? To do this, Canson invites you to showcase your students’ creations and share them with our community. Whatever the subject, we’ll be delighted to see what you’ve created! Just contact us using the contact form.