Composition is one of the keys to successful photographs. People will have less appreciation for your work if the composition does not work out, even if the observer does not appreciate why

Placing the subject in the centre of the picture gives a type of composition that should be chosen strategically. The picture can work if the surrounding symmetry means that the subject is naturally centred. But it is of fairly limited use. 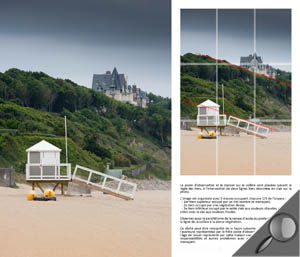 2. The rule of thirds

This technique means placing the subject off centre. How? Imagine that the viewfinder (or rear screen) has a three by three grid formed by two sets of lines running horizontally and vertically Then, simply place the subject on one of these line or one of the points of intersection.

For landscapes or other panoramic scenes.

4. Direction of gaze or movement

Note: Adapt these rules for your own use!

You’ll always learn more from your mistakes than from your most successful pictures!