Canson®, 450 years of paper.
Montgolfier, Canson®, hot-air balloon, paper, drawing pad... What are the links between them, how do they fit together?
Once upon a time, there was a papermaking family by the name of Montgolfier....
Excerpt from Marie-Hélène Reynaud's book "d’art et de papier" 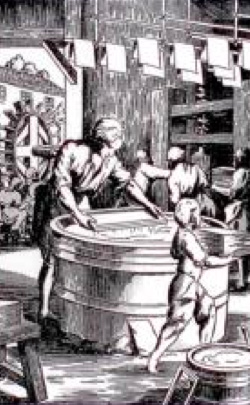 Birth of a saga

Ambert papermaker Jacques Montgolfier leaves his native Auvergne to settle in the Beaujolais area. This marks the beginning of the geographical expansion of this family which, across several centuries, is to set up a large number of paper mills. 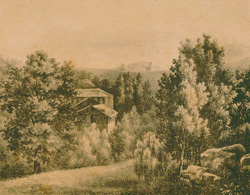 Michel and Raymond Montgolfier – the sons of the Beaujeu papermaker – arrived in Vidalon where the Chelles papermaking family of Auvergne was involved in paper sizing. They fell in love with the master's daughters and, two weeks later, married Françoise and Marguerite, a union which rooted the Montgolfier family in Vivarais. 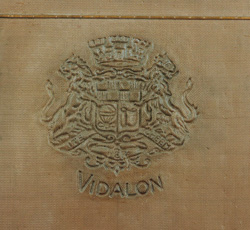 The beautiful vellum of Annonay, heralding the technical revolution

Those with a penchant for nostalgia dreamed of beautiful parchment stemming from the skin of stillborn calves – vellum. If only we could produce a smooth paper, without any traces of laid lines… The Montgolfier achieved it by reproducing the technique of the English, followed by the papermakers Johannot and Réveillon. 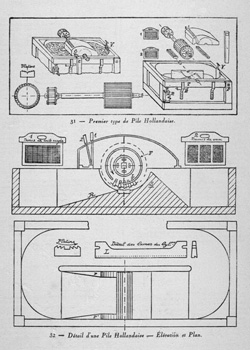 Seeking whiteness with the Hollander beater

Importations of white paper from Holland offset the kingdom's trade balance. This worried the Languedoc authorities who decided to encourage the papermaking firm most likely to be able to process rags according to the Dutch method. The Montgolfier firm was chosen. 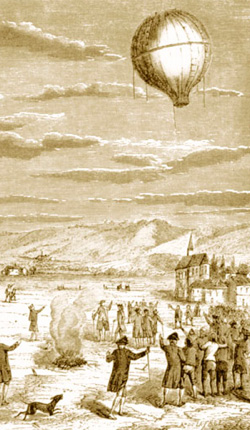 From paper to the conquest of the skies and space

On 14 December 1782, a strange paper bag inflates above a fire in the Montgolfier brothers' garden. It straightens up and lifts off into the sky. It crosses the river and gently lands on a hillside. Joseph and Etienne Montgolfier transformed the dream of Icarus into a reality. One day, man will fly like a bird… 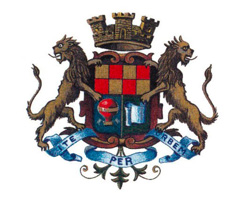 The Manufacture Royale of Vidalon

On 19 March, the Montgolfier paper mills were hoisted to the rank of Manufacture Royale, a highly coveted title by all of the kingdom's papermakers. It was bestowed on those whose innovation potential ranked them at the top of the profession.
A few years later, the Bastille fell. The king's favour would no longer be seen as desirable.
In 1794, the company's logo took on a motto and a coat of arms: the red and gold check of Annonay, the hot-air balloon invented by the Montgolfier brothers and the motto Ite per orbem (Go around the world) which evokes the already international spread of papers. 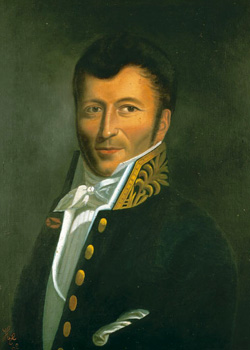 Etienne de Montgolfier has been dead for two years. His son-in-law, Barthélémy Barou de la Lombardière de Canson takes over from him. This is when the name Canson first appears in the history of papermaking, a name which will become mythical for artists and lovers of beautiful papers. 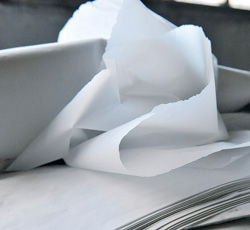 Transparency and colour, the papermaker's innovation

The Canson family continued to focus on innovation like the Montgolfier before them. In the greatest secrecy, they invented tracing paper, this transparent medium which avoided the need for architects to redraw the same plan again and again. Then, they started colouring paper in the pulp, giving the sheets a lasting, uniform colour. 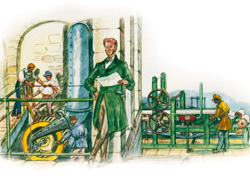 The suction box – the beginning of modernisation

The Canson family constantly strives for improvement. Etienne invents the famous suction boxes which improve water drainage by sucking out the water under the metal mesh, thereby giving more resistance to the sheet being formed. 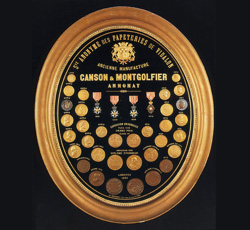 With the paper machine, it became urgent to modernise sizing. How could such long sheets be manually be dipped in a gelatine bath? Barthélémy and Etienne de Canson develop a sticky wax-based product which is mixed into the paper pulp. 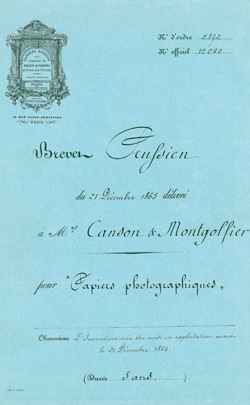 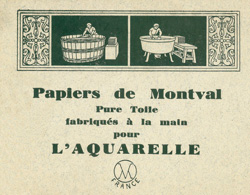 Finding quality rag paper for the printing of artwork was becoming increasingly difficult. Artistide Maillol asked his nephew Gaspard to make him some nice sheets of paper for his woodcuts. He set to work in Montval, near Marly-le-Roy, but the war interrupted his efforts. On his return, he settled on the bank of the Deûme to produce the famous Montval® paper with its bather imprint. 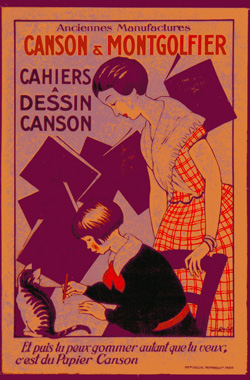 A subsidiary in New York

Having an agent in the United States, like in numerous other countries, was no longer sufficient to the Canson paper mills. On 1st July, Canson & Montgolfier Incorporated was inaugurated. 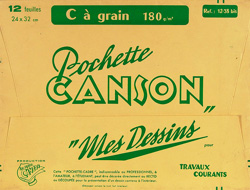 The Canson pack in all school bags

Art teachers weighed down by piles of notebooks to mark, drawings that cannot be exhibited… The Canson paper mills find the solution: a paper pack to sell sheets by the dozen and preserve them. The famous pack was born, withstanding the passage of time and fashions. 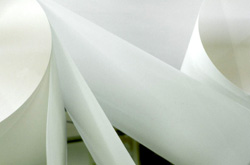 Arjomari, a turning point for Canson 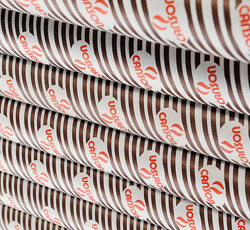 For Canson, computer aided drawing and the conservation of archives are the subject of the same concern: developing and marketing products which meet current needs. Computer aided design (CAD) and the High Quality Conservation (HQC) label appear in the catalogues. 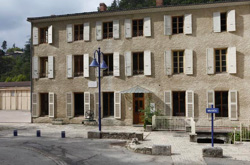 Looking to the past to enhance the present

The Canson & Montgolfier paper mills create their museum in the native home of the inventors of the hot-air balloon. Innovations of yesteryears and avant-garde machines were now to become accessible to the general public. 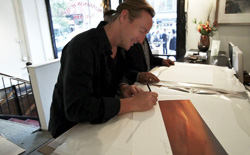 Canson joins the Hamelin Group, a family business which is European leader in school and office products and holder of the spearhead brands Oxford and Elba. The brand continues to adapt to new requirements. With Canson Infinity, paper is now available to photographers and artists wishing to print their works on an outstanding paper.

With 450 years of history and expertise in paper-making, the French brand, distributed in over 100 countries, has now been acquired by F.I.L.A. Group
Massimo Candela, Chief Executive Officer of FILA stated: "Canson® is the most recognised business globally involved in the production and distribution of high added value paper and we are very proud of this acquisition. Canson® acquisition, together with the recent acquisitions of Daler Rowney Lukas and St Cuthberts, demostrate our international focus. We believe that the recent deals are crucial for the growth and further development of the FILA Group which seeks to become a global leader also in the Art and Craft sector”.

Canson is embracing a new level of innovation and identity with a new, strong and recognizable logo, composed of easy-to-read capital letters. Clear and modern, the logo includes the symbol of the hot-air balloon which replaces the letter O in Canson, bringing classic, historical look to the refreshing touch.
The new logo also includes the slogan “Manufacture depuis 1557”, underlining both the French origin and the year of the brand’s creation.