Set out to discover the XIXth century

For kids History of art
Rate this tutorial 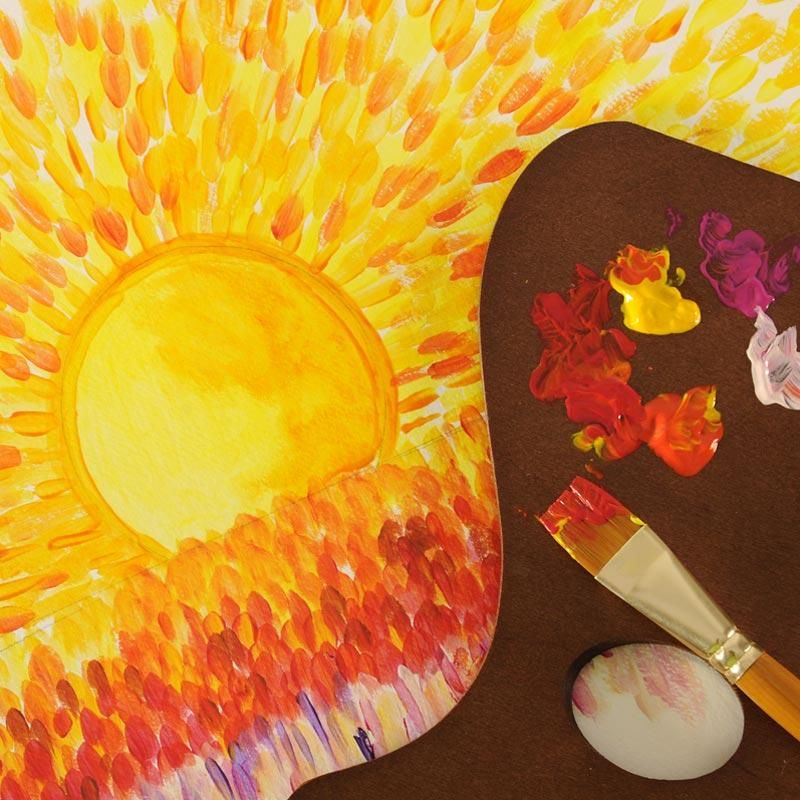 This work sheet will take you on a discovery of the XIXth century. A major turning point in history, the XIXth century (from 1815 to 1914 approximately) was above all THE century of Europe and the second industrial revolution.

Following on from the French Revolution of 1789, the old social and political structures lost momentum in favour of profound transformations.

From the Académie above all else

1830 marked the definitive end of the Restoration period, during which monarchic sovereignty was once again topical in relation to kings Louis XVIII and Charles X, brothers of Louis XVI. It was at this time that the July Monarchy was established, headed by the house of Orléans, a younger branch of the Bourbons. At the same time, Academic art  established itself as the official style, dictated and recognised by the Académie des Beaux-Arts in Paris This gave way to a conventional movement that had people talking about it until around 1880...

Behind the doors of the Académie

The Académie des Beaux-Arts in Paris was considered at the time as the most impressive of all. How was it structured? It brought together various academics and artists in control, as well as producing works of art. Of course, they also protected their creators and ensured their renown.

The Académie operated like an art school with an entrance test, a training cycle, a "final examination" in the form of a project, a study trip to Italy for the most deserving students to discover the Renaissance painters, a salon where the most conventional works were exhibited and then sold... All these rungs of the ladder had to be climbed before being recognised by their contemporaries.

The practice of academic painting requires above all observance of strict rules. The preferred themes are history, antiquity and an interest in orientalism.
In terms of genres, painting of historic scenes, portraiture and nudes dominated artistic output.
Painters therefore had to favour noble subjects and above all prove their full mastery of drawing.
Their models? Painters of the Renaissance period above all, but also those of French neo-classicism like David.

Imposed by the Académie des Beaux-Arts, these principles were respected "to the letter" by artists:

The shift to Realism

Uprising of the people, establishment of the second Republic, social and economic concerns... It is above all this strained historic context that "inspired" the artists of the time. Far from the romantic idealism and in reaction to Academic art, Realism found its origins in the heart of society before becoming a movement in its own right between 1850 and 1870.

Realist painting came to light in France around the 1840s. It illustrates above all artists' new interest in the society around them: rural settings, urban areas, scenes of everyday life of all genres...
A long way off biblical or antique subjects, realistic painters focused on the "real" representation of what was around them, "living art" as it was called by Gustave Courbet, leader of this movement.
The subjects became more banal, anchored in reality, but paradoxically gained in power and validity. The role of observation and an eye for detail allowed them to seize precious moments of everyday life, "suspended" outside time by the work of art and thanks to the technique of realist painters. A bit like photographers would go on to do...

The main characteristics of realist painting:

Between 1860 and 1880, an independent group of artists called the "Group of 1863" decided to "shift" artistic codes and establish its style painting far from the overly strict rules of the Académie. There was a veritable explosion in artists' studios, where painting in complete freedom became possible.
In 1874, unable to exhibit at the Salon of academic painters, the "impressionists" exhibited at the premises of photographer Nadar, who warmly welcomed them. It was on this occasion that the term "Impressionists" was used for the first time following the criticism of Monet's painting "Impression, Sunrise". The painting was considered incomplete, which paradoxically contributed to the full artistic recognition of the movement.

In its way, the industrial revolution also contributed to the explosion of the Impressionist movement:
ready to use tubes of paint, lighter and easily transportable easels...
Painters came out of their studios to work directly in the places that inspired them. And new means of transport were even used for this purpose: train, boat...
This allowed them to depict a wide range of landscapes across France as well as Europe.

In terms of colours, there was a shift to purity, vivacity and the juxtaposition of strokes in the form of commas.
The aim? To depict the decomposition of light and its multiple effects on landscapes. Season, time of day, weather... All these criteria had a powerful influence on Impressionist painting.

In terms of themes, there was a shift to landscapes, town or country, places of work and meeting places like factories, railway stations and also festivals and leisure.

How did Neo-Impressionism work?

Painting and painters became more independent and asserted themselves through a form of "extremism". The Impressionist movement became radicalised to give rise to Neo-Impressionism, which in turn brought art into the XXth century.

The principle? Using colour in miniscule strokes to create a form of illusion. The work of looking at the work of art also changed.

Scientific advances in terms of optics also led to a new way of looking at the colour circle. The idea was to make maximum use of colours by highlighting the purity and brightness. The search for the most authentic contrasts is what characterises Neo-Impressionist paintings, not forgetting the sense of geometry, rhythm, arabesque and of course light. Neo-Impressionist painting was based on an original scientific approach.

Colours were no longer mixed on the palette or on canvas and were juxtaposed by small "marks" that more effectively draw in the eye of the spectator. This technique evolved into what became known in the 1880s as "Divisionism" and then "Pointillism", the explosion of luminosity thanks to working with colours.

As for themes, Neo-Impressionist painters worked with the same themes as the Impressionists.

During the second half of the XIXth century, painter Paul Gauguin gradually established himself in the art world. Influenced by his childhood in Latin America, his taste for travel and exoticism, Gaugin managed to establish his art.
In 1874, his meeting with Pissarro turned his pictorial view upside down. Initiated into the Impressionist landscape, he also learned to work with light and colour. From 1879 to 1886, he exhibited alongside the biggest names... while also starting to assert his independence of conventions.

During summer 1888, Paul Gaugin broke with the Impressionist movement while continuing to express real admiration for Pissarro, Cézanne and Degas.
He created the Ecole de Pont-Aven and profoundly changed his style of painting... He even tended towards the art of stained glass with the creation of Cloisonnism.

He then chose to leave for Polynesia in 1891 on the trail of the indigenous people and remote tribes, in search of truth and authenticity. From Tahiti to the Marquesas Islands, his painting became more imaginative, symbolic, mystical and vital. Like an ethnologist, he embraced Maori culture, certain characteristics of which he stylised in his paintings.

Fauvism and the end of the century

Fauvism is colour above all else... and a big step towards the XXth century and all its modernity! This movement really formed part of the transition between the two centuries and flourished in the early 1900s. However, despite its very short life span, it marked all of Europe...

Henri Matisse, leader of the movement, paved the way for a new way of working with the intensity of colour and defining simple forms.

The aim? Looking to provoke or even shock in order to make people more aware. "These are the Fauves!" said a critic when talking about the artists in this movement... hence the name. However, Henri Matisse long defended himself against this "accusation", specifying that he only wanted to rebuild the paradise of men and women through contrasting colours and creating emotion. A reinvention of the art of painting of some kind.

In terms of painting...
The canvases are tinted with red, green and yellow... The colours are no longer mixed either on the palette or on the canvas. Applied without artifice, taken directly from the tube, they depict with all their eloquence and power of suggestion.
Just by simplified drawing in an almost decorative manner, Matisse managed to give the impression of volume using essentially solid colours, as with his famous "Nu bleu IV" done on Canson® paper.
But he also sought to create a form of "platitude": the different objects that make up his canvases are sometimes reminiscent of simple pieces of painted paper stuck side by side.
However, he was able through his work to explore the specific powers of light, while also ensuring that drawing and colour were always in place.

Some paintings by Henri Matisse:

– Woman with a Hat 1905 – Laurette in a White Turban – Black and gold nude – Room with view of the sea – Interior and phonograph – Reclining nude – Jardin du Luxembourg – Luxury, Calm and Pleasure…