Set out to discover the king of pop art: Andy Warhol 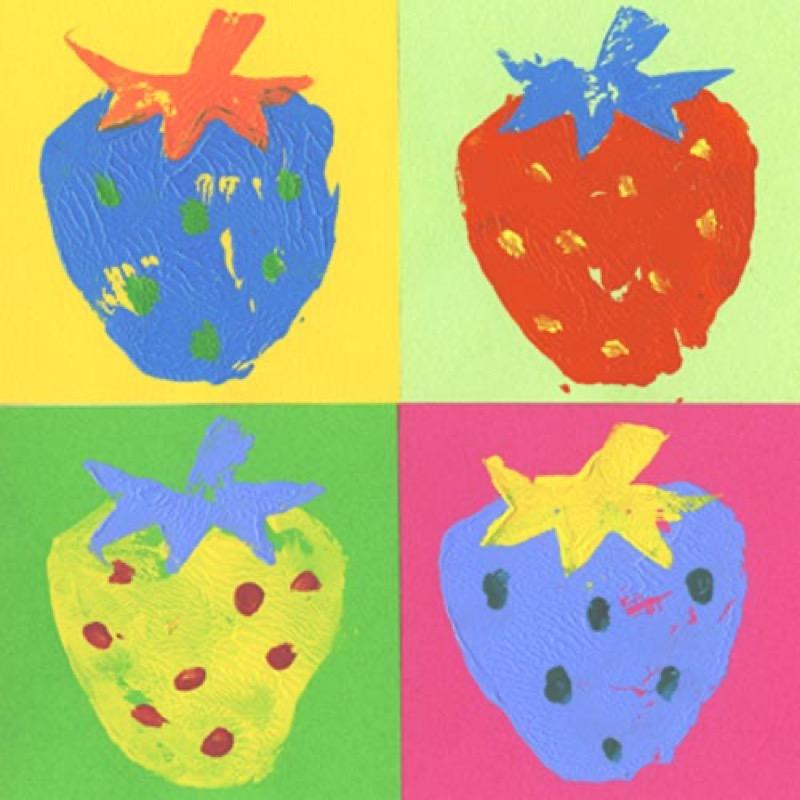 With this information sheet, set out to discover the king of pop art: Andy Warhol. Children will understand the approach of Pop art artists and put themselves in the shoes of these artists by practising the screen-printing technique.

A current film star, a latest-generation item, a social event that has hit the headlines... Getting children to create artwork in the style of Warhol presents the advantage of being able to use the items or personalities of their day, or even work with their own image. This is sure to generate a real interest in the artist, his works and his technique...

Andy Warhol is an American artist born on 6 August 1928 in Pittsburgh, Pennsylvania, who died on 22 February 1987 in New York. Following a successful career as a commercial illustrator, Warhol became famous worldwide for his work as a painter, avant-garde filmmaker, music producer and author.

Context and analysis of works

When Andy Warhol moved to New York in the early 1950s, the artistic movement of the time was called "abstract expressionism" the most prominent names in which were artists like Jackson Pollock, Franz Kline and Mark Rothko.

Considered too elitist by Andy Warhol and his peers, the movement was flatly rejected in favour of "pop art" (short for "popular art"), newly arrived from Great Britain. During the 1960s, this became the only possible path for them to take.

Attracted and fascinated since childhood by all the images he saw, Warhol worked for advertising agencies and his original designs, using blurred lines or stamps and stencils, were quickly noticed.

In 1964, he created "The Factory", an art studio that was a space for creation, exhibitions, making and projecting film, where Andy Warhol also organised concerts and was on occasion even transformed into a nightclub! A true underground "place to be" that welcomed the entire New York jet set...

Warhol's technique? Screen-print photography, based on the principle of using famous advertising photos or images and transposing them to canvas on a coloured background and duplicating it in several copies. This is the stereotype of pop art.

Often regarded as the "Pope of Pop Art", Warhol asked questions in his works about consumer society in a cynical and also provocative manner. Art has become consumable, ephemeral and reproducible, which completely contradicts the unique nature of classical works of art.

Throughout his career, Andy Warhol focused on his three favourite themes:

Campbell's soup cans, Brillo boxes, Coca-Cola bottles... Warhol chose everyday objects to turn them into true icons, which did not fail to disconcert the art world.

Photos of film stars were always found in all media of the day. Warhol turned this into a portrait, such as that of Marilyn Monroe or Jackie Kennedy.

Is it because his father died when he was a teenager that Andy Warhol had this unusual relationship with death? Or because he escaped an assassination attempt in 1968? It's difficult to say, but throughout his career, he depicted dramatic events. Even his famous portraits sometimes look like posthumous homages, such as those of Marilyn Monroe done after her suicide or those of Liz Taylor, created when she was very sick.

Before Warhol, art was reserved primarily for the enlightened and the highest social classes. But for him - as for all pop art followers - art should be accessible to the largest number and everyone is an artist who doesn't know it. 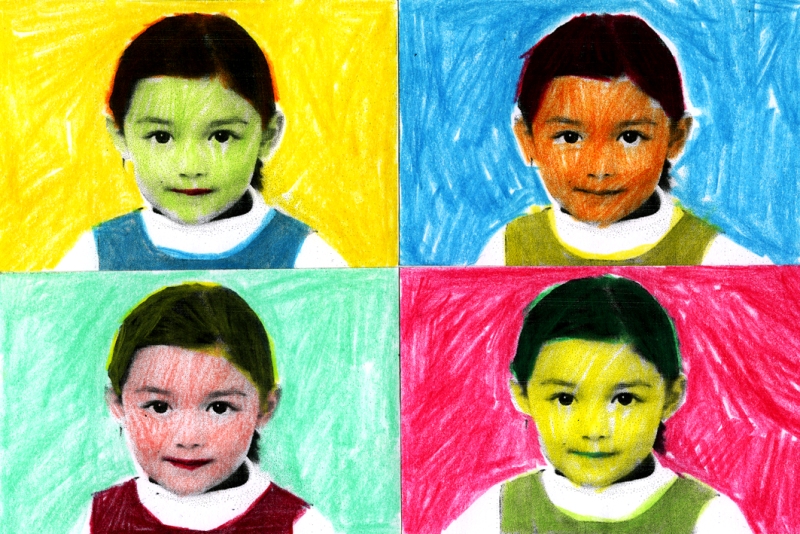 > Passport photos of each student

- To explore the idea of repetition and colour variations

Photocopy your children's passport photos in black and white, enlarging them by at least four times compared with the original size. Give preference to using fairly contrasting photocopies to make the rest of the task easier.

Give each child four copies of their photo and then get them to colour in their portraits, instructing them to use a different colour for each part: background, face, ears, mouth etc.

Ask them to use bright colours!

Stick the coloured portraits onto foam board pre-cut by you to contain two columns and two lines of portraits. Don't leave any space between each portrait.

Also cut out a cardboard triangle for each child and stick it to the back of each foam board with sticky tape to make a trestle. This means the children will be able to proudly exhibit their creation at home! 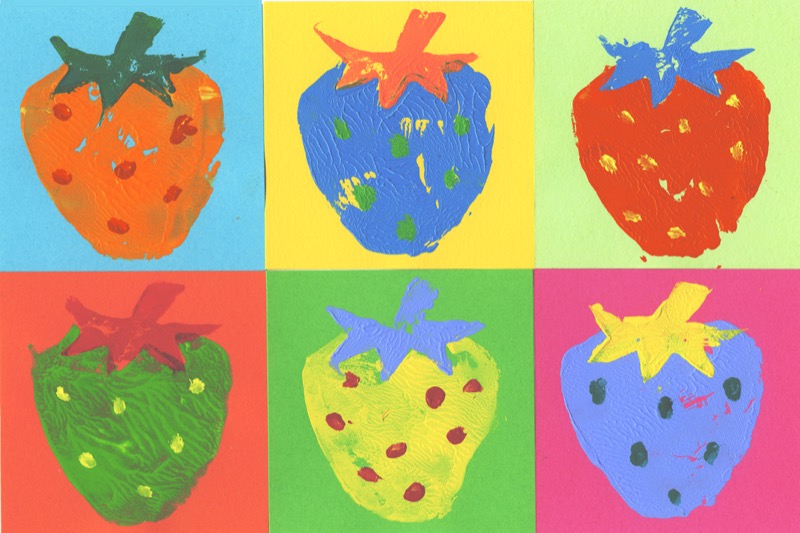 - Foam paper or Canson® foam board

- Learn about the technique

In this situation, a piece of fruit will be used to create a work like Warhol's famous "Marilyn" portrait and reproduced in six copies.

Get the children to draw and then cut out six exactly identical pieces of fruit on the foam or foam board. Suggest they depict a fruit that can be identified only by its shape like an apple, banana, strawberry etc.

Then get them to cut out six rectangles of identical size but in different colours in brightly coloured sheets of paper. Ask the children to stick these rectangles side by side on a sheet of paper, for example positioning them in the form of two rows of three portraits.

Advise the children to dip the foam fruits into six brightly coloured paints and then apply them to the middle of the rectangles.

To enhance their creation, suggest that the children add small pieces of cotton wool to recreate the surface of the fruit, still alternating colours from one "portrait" to another. They can also finish off the fruit with a leaf template, which you recommend that the children apply in different colours to respect Warhol's style.

Inspired by this worksheet? Why not continue the adventure? To do this, Canson invites you to showcase your students’ creations and share them with our community. Whatever the subject, we’ll be delighted to see what you’ve created!  Just contact us using the contact form.