For kids History of art
Rate this tutorial 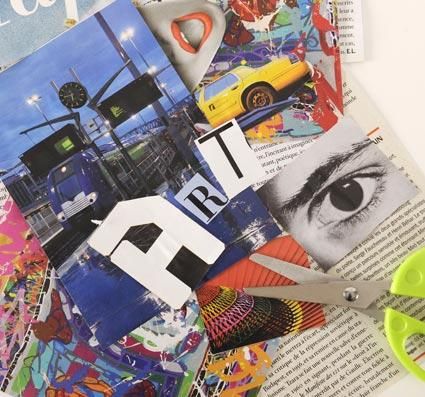 From Cubism to outsider art, Surrealism to Dadaism...

The 20th century saw numerous artistic movements come and go, all different, but all illuminating in terms of the events surrounding them.

The complete opposite of 19th century works, particularly Naturalism, Cubism is characterised by its use of geometric shapes. This avant-garde movement surely originated with Picasso's  "The Ladies of Avignon".  The massive geometric shapes of the female bodies show the Spanish painter seeking to magnify certain shapes as if sculpting.
A lover of women, Picasso later created "Head of a Woman III". Painted on Montval® de Canson® watercolour paper, it presents a portrait of Dora Maar, his lover and muse at the time.

How can we recognise a Cubist piece?

Cubists believe that objects possess different facets, which is why they depict them as geometric shapes which ignore the concept of perspective entirely.
Cubists consider all the objects and utensils of daily life worthy of representation, and they prefer to depict still life in their own way rather than a landscape.

Abstract art, an end to reality

As opposed to representational art, abstract art claims to move away from visual realism, giving greater priority to geometric shapes and colour. It is often said that Vasily Kandinsky is the inventor of this movement, but it is often also ascribed to two other masters in the field: Piet Mondrian and Kasimir Malevitch.

There are two main trends:

How can we recognise an abstract piece?

Abstract artwork is characterised by the freedom of interpretation offered to the observer. Far from a reproduction of a model or real object, it recreates shapes and makes extensive use of primary or secondary colours.

Ready for anything with Dadaism?

It is said that the name "dada" was chosen by a paper knife randomly falling upon this word in a dictionary in 1916. At the origin of this intellectual, artistic and literary movement, we find personalities such as Tristan Tzara or Marcel Duchamp, who refused to follow any conventions or rules whatsoever.
Thanks to their irreverent spirit and incredible creative ability, they overturned the traditional artistic approach to invent a new form: "Readymade". Marcel Duchamp's overturned urinal remains an eloquent example.
Louis Aragon, Paul Éluard, André Breton were also part of the Dadaist movement.

How can we recognise a Dadaist piece?

Collage, blending, sculpture... Dadaist works incorporate a certain amount of humour and seek above all to spark an emotional response, a reaction from those contemplating them. Stone, wood, iron, tin - any material can be used when the goal is "freedom" above all.

A touch of the Surrealist...

Originating with the Dadaist movement, Surrealism has developed over the course of 40 years in fields as varied as the visual arts, music, literature, and more.
Inspired by Guillaume Apollinaire, Surrealism is based on Sigmund Freud's studies of dreams and the unconscious.

How can we recognise a surrealist piece?

Several subjects which are deformed and have nothing in common? You're surely looking at a surrealist piece drawing upon the themes of dreams, extraordinary phenomena and the imaginary.
Using such techniques as collage, rubbing, writing (exquisite corpse),  and automatic writing, surrealists give voice to their deepest thoughts to create strikingly original works.

Outsider art is out there!

Demonstrate spontaneity and innocence. This was the goal set by Jean Dubuffet in 1945 when he began to take an interest in the works of madmen, children, the elderly, and all those who were not part of the artistic elite.
Madness, simplicity, and the natural: these are all qualities that Jean Dubuffet considered the best tools to create true masterpieces.

How can we recognise a piece of outsider art?

Outsider art favours the use of crude techniques without bothering with academic artistic rules.

After the MoMA opened in New York in 1929 and exhibited "Cubism and Abstract Art" in 1936, the United States saw the emergence of a new art form. Its main movement was abstract expressionism, in which Pollock played a major role.
This movement is characterised above all by a new relationship to motion, colour and theme.

How can we recognise an American abstract expressionist piece?
There are two styles:

At the end of the Second World War, which saw the opposition of communism and capitalism, artists seemed smitten with freedom, like Jason Pollock, who angrily dashed his famous streaks of paint across his canvases.
Considered too elitist by Andy Warhol and his peers, "American abstract expressionism" was wholly rejected in favour of "Pop Art" (a contraction of "popular art"), which had just arrived from Great Britain and was enjoying its heyday in the 1960s.

Based on a critical view of the surrounding world and its contemporaries, the Pop Art movement aims to criticise consumer society and denounce the harmful influence of the media and advertising on human behaviour.

How can we recognise a Pop Art piece?
Collage, acrylic painting, photography, silkscreen printing... Pop Artists use all of these techniques with one thing in common: the use of bright colours.

This artistic trend was officially born in 1960, following a declaration written by Pierre Restany and signed by artists such as Yves Klein, Raymond Hains, Jean Tinguely, César and Arman.
It depicts consumer society and daily life without any trace of splendour. This explosive movement, which came to an end with the death of Yves Klein two years after its creation, gave rise to an impressive production of works.

How can we recognise a piece from the new realists?
Like the surrealists, new realists aim to use ordinary and commonplace objects to create their pieces. The only difference lies in the fact that these objects were found in bins! The idea is to create symbols of consumption, not to represent the world, but rather to "present" it and nothing more.

Are you inspired by this factsheet? Why not continue the adventure? To do this, Canson invites you to showcase your students’ creations and share them with our community. Whatever the subject, we’ll be delighted to see what you’ve created! Just contact us using the contact form.