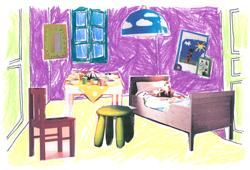 This project will aid discovery of the most famous Dutch artist, Vincent Van Gogh.

Through the work of this artist, children will learn to grasp the technique of perspective, discover work on material and capture emotions and feelings from an image.

Choosing to study Van Gogh invites children to gradually discover perspective as a result of the concept of the vanishing point. It will also help them to create simple form, letting them take account of the environment in an effective way. It's also a way to tap into their feelings and emotions.

Vincent Van Gogh was a Dutch painter born on 30 March 1853 at Groot-Zundert (the Netherlands) and died on 29 July 1890 at Auvers-sur-Oise (France). A Dutch painter and illustrator, his work is full of naturalism, inspired by impressionism and pointillism, heralding Fauvism and expressionism.

The work of Van Gough comprises more than a thousand canvases and drawings mostly dating from the 1880s.

Today he is considered as one of the greatest artists of all time.

Context and analysis of the work

Following the revolution or 1789 that led to unprecedented upheaval in French society, the 19th century created changes that touched all areas of life, even those of the world of art.

The Impressionists had already rebelled against the established system, and Vincent Van Gogh had mixed with them thanks to his brother Theo, who was an art dealer.  Not wishing to remain in the capital, Vincent Van Gogh preferred the allure of the south of France and moved to Arles.
He asked Paul Gauguin to join him to share his passion and paint together, but the idea fell through and Gauguin chose to leave for Brittany.

Following attacks of madness which led him to cut off his left ear, Van Gogh was hospitalised in the south, but his brother Theo had him taken back to the Paris region, to Auvers-sur-Oise for consultation with Doctor Gachet.
In the last two months of his life, he began a frenzy of painting that saw him produce several works a day. These particularly dark and tortured works of art heralded the artist's upcoming fate.

He committed suicide in 1890 without becoming famous, but was recognised for his talent, particularly by Gauguin.

Analysis of the work

1. In terms of form
As the name indicates, "Bedroom in Arles" depicts the artist's bedroom. It is an oil painting on canvas from 1888 in 72 x 90 cm format that is currently exhibited at the Van Gogh Museum in Amsterdam.
After the original was subject to damage, Van Gogh painted a second, slightly different version that is on display at the Art Institute of Chicago. Van Gogh also produced a final, smaller copy (57 x 74 cm) that he gave to his sister. It is exhibited at the Musée d'Orsay in Paris.

2. In terms of technique
Van Gogh used sharp brush strokes leaving thick and granular layers on the canvas, creating a material effect that is easy to recognise.
He used vanishing lines to produce an offset perspective and used straight lines to mark out different objects. His use of colour also serves to alleviate the instability of perspective.

Like his Impressionist counterparts, Van Gogh preferred light, spread out colours over large areas. Nevertheless, he also created a very personal style with a choice of colours that paved the way for two movements that followed him: Fauvism and expressionism.

3. In terms of meaning
Bedroom in Arles is not just a simple reproduction of one of the rooms in the artist's house. It was above all a way for him to express a feeling, an emotion, an occurrence here, and as he wrote to his brother Theo, "absolute rest" as a result of the bed that occupies the majority of the space as well as the choice of colours used. The colours chosen (lilac and very pale lime green) pay homage to Japan, prints of which Van Gogh studied with admiration.

The other objects present in the work, such as tables or chairs are often paired, as if Van Gogh wanted to suggest that peace, balance and order reign within his bedroom.

4. In terms of use
Through this work, Van Gogh wanted to give the appearance of the atmosphere of his room, and invites us to access this personal space.
He finished this painting while Gauguin was about to visit him to assist in founding a circle of artists. 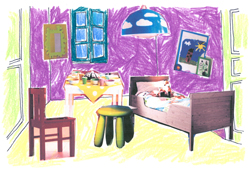 1 - Teaching materials: Children from 2 to 6

Method:
Before starting the activity, collect several catalogues or leaflets containing children's furniture.  You can also find the required material on the internet by printing furniture from specialist brands.

Prepare an empty version of Van Gogh's bedroom beforehand. To do this, choose a copy of "The Bedroom", then trace the floor, the angles of the walls, the window and the doors. Photocopy your background on 180 g "C" à grain sheets and give one out to each child.

Invite them to create a children's bedroom using the catalogues made available to them.  Suggest that the children cut out their favourite items, then glue them onto your background. Bedside table, desk, chest of drawers etc. Once the furniture collages are finished, ask them to colour their bedrooms using coloured pencils. 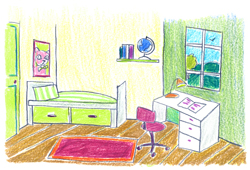 Pass a copy of "The Bedroom" by Van Gogh around and ask the children to focus on the perspective shown.
Then ask the children to draw their own room, starting by tracing the lines of construction for the area: Walls, floor, door and windows.  Once the outline is finished, ask them to draw in the items of furniture.

Then ask the children to colour or paint their creation.